Note: For updates from the College about resources for learning, teaching and working remotely due to the COVID-19 pandemic, visit: covid-19.engin.umich.edu
Enter your question or keyword below to search our knowledge base. At any time, you can click the Blue button in the bottom-right corner of the page to open a Live Chat session with a CAEN consultant. If no consultant is available, you will be prompted to submit an offline message, and the next available consultant will contact you at the email address you provide.

How do I fix echoing or feedback in the audio of a BlueJeans meeting? As a meeting moderator, how do I forcibly mute audio from others?

When echoing or feedback occurs in the audio during a BlueJeans meeting, it is often the result of using phone and computer audio in the same room, or similarly using a microphone and speakers in close proximity. In those scenarios, placing the phone/microphone further away from the speakers can resolve the issue. Sometimes, however, the "noise" may be generated by a remote attendee of the meeting, and the moderator (or organizer) will need to take action.

When the noise is being generated from a remote BlueJeans meeting attendee and you want to forcibly mute their audio, the Who's Talking tab under the People list is useful for identifying from whom it is being generated: 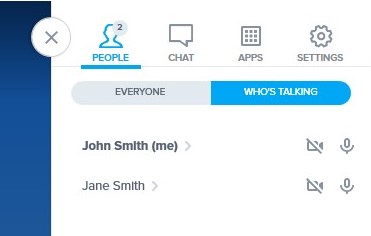 In the example above, John is speaking, but additional sound is being generated from Jane, thus Jane is likely the source of the noise. The meeting moderator can click Jane's microphone icon to mute their audio, and see if it corrects the problem.

Further help regarding these issues is available on the BlueJeans support page, Echo - how to identify source and steps to fix.

Haven't found the answer you're looking for?
Contact CAEN
or
Go to the CAEN Home Page
Knowledge Base by Helpjuice